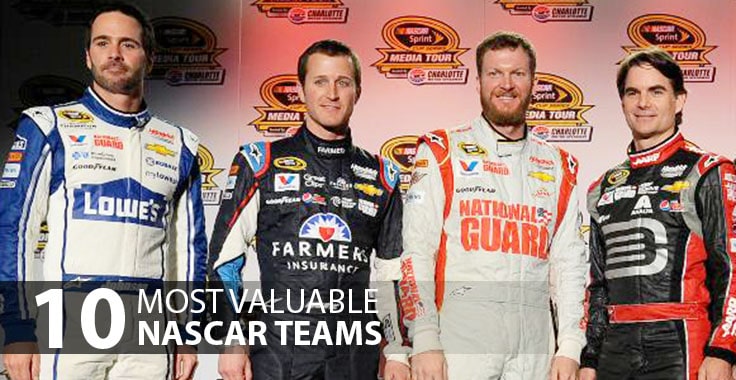 The 2008 financial crisis had hit NASCAR very badly. Fortunately things have since improved. Television viewership has started increasing. Many mega deals are signed.

Here are the top 10 most valuable NASCAR teams of 2015, according to Forbes.

Last year the team had just one top ten finish between the two drivers. This year seems to be a good year to the team as it expands to three full time cars with the addition of Cole Whitt. The team earned a revenue of $15 million and suffered a loss of $1.6 million. This North Carolina based team is owned by restaurant entrepreneur Bob Jenkins.

Richard Petty Motorsports’ Aric Almirola won at last year’s Coke Zero 2014. It was team’s first win since Marcos Ambrose’s victory in 2012. Sam Hornish Jr. will replace Ambrose this year. The team earned a revenue of $47 million and made a profit of $3 million in 2014.

The team earned a revenue of $48 and a profit of $4.2 million in 2014. Jamie McMurray lost part-time sponsor LiftMaster to Hendrick’s Kasey Kahne. The team benefited from the arrival of Kyle Larson, who had a season long sponsorship from Target.

In 2014, the team put only two cars in the Chase. Unfortunately neither of them won. It earned a revenue of $50 million and made a profit of 5.7 million.

Last year Keselowski and Joey Logano finished the season in the top five, earning $17 million in winnings. The team earned a revenue of $71 million and a profit of $8.8 million.