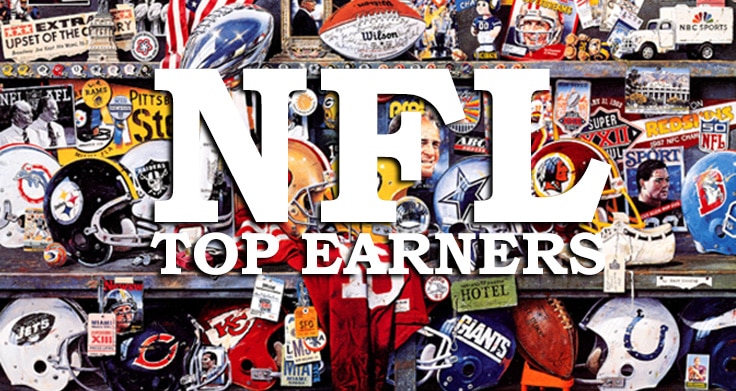 National Football League (NFL) has produced many talented players. Some of them have become millionaires. Manning remains the top earner in NFL history.

Here is the top 10 richest and highest NFL salaries of all time as of 2014.

This quarterback plays for Atlanta Falcons. He agreed to a five-year contract extension worth around $104 million with the team on July 25 2013.

This quarterback plays for New York Jets. He signed a one-year $5 million contract with the team on March 21 2014.

This quarterback plays for Arizona Cardinals. He signed a six-year contract extension through the 2014 season with the Bengals on December 29 2005. In addition to the three years remaining on his existing deal, the value of the extension was worth $118.75 million over nine years.

This football wide receiver plays for Arizona Cardinals. He signed an eight-year $120 million deal with the Cardinals on August 20 2011. This talented player has many records to his credit. On November 24 2013, he became the youngest NFL receiver to reach 11,000 career receiving yards.

This quarterback plays for San Diego Chargers. He signed a six-year $92 million contract extension with the team (around $38 million guaranteed) on August 24 2009. His Rivers for Hope Foundation raised more than $1 million to help abandoned and orphaned children.

This quarterback plays for New Orleans Saints. He signed a six-year $60 million deal with the team on March 14 2006. New Orleans had made an offer that included $10 million in guaranteed money the first year and a $12 million option the second year. He remains the Big Ten Conference record-holder in virtually every passing category.

Julius Peppers signed $91.5 million contract for six years with Bears in 2010. If he can manage 21 sacks over three years and finish with 140 career sacks, he will gain a place in the Hall of Fame.

This 33-year-old football player’s base salary is $15.15 million. This New York Giant’s signal-caller has two Super Bowl rings on his resume. Currently he is struggling to improve his game.

The New England Patriots rewarded Tom Brady with a pay raise; however, his unselfish nature of placing the team ahead of his financial gains keeps him in the second place. He took less money ($70.6 million for five years) than he deserved so that the team could use the savings to build the roster around him.

Many football lovers are of the opinion that Peyton Manning is the greatest quarterback of all time. His immense talent enabled him to negotiate the five-year, $96 million contract with the Broncos. During the last season, he had the best regular season any quarterback has ever had in the history of the league.

The above-mentioned football players have many fans all over the world.