15 Most Controversial Magazine Covers Ever 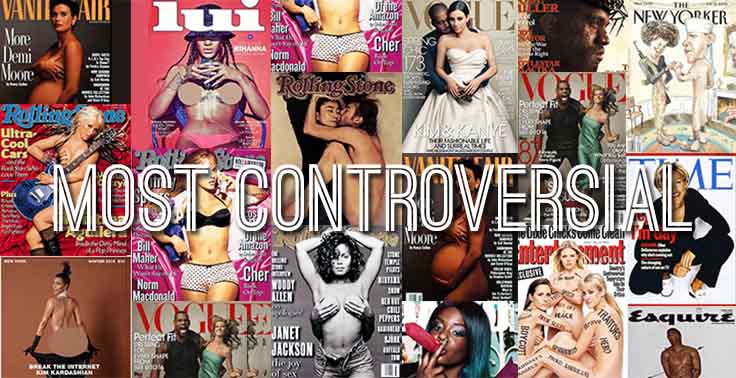 The say “don’t judge a book by its” cover but when it comes to selling magazines, it’s all about the cover.

Let’s see some of the most controversial magazine covers ever.

Kim Kardashian’s bare booty on the cover of Paper has to top the list of controversial mag covers in 2015. It is definitely big – pun intended. Kanye liked it and he better if he wants to keep his money and his sweetie.

They planned to break the net but it just did not break. Actually this cover got less attention than Lady Gaga but Kim’s handlers are not telling her that. 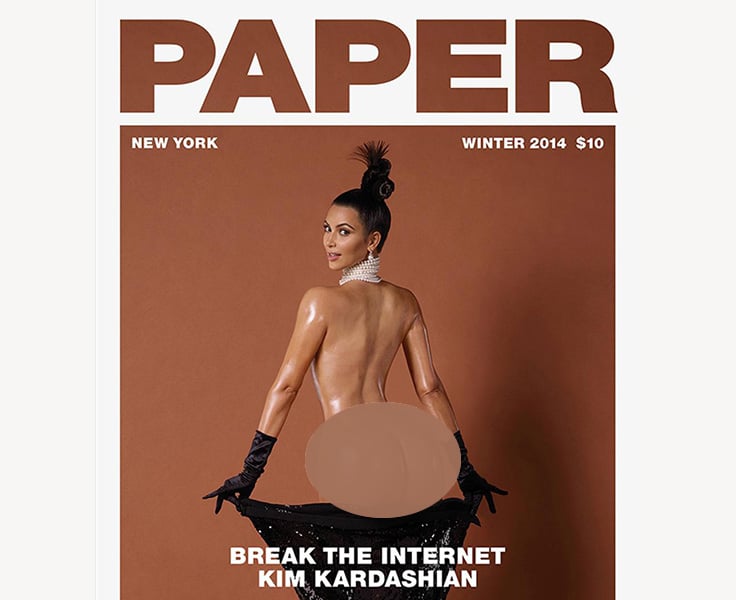 Too young for the Stone. Perhaps not. This was a definite ploy by Britney and company to shed the vestiges of the oh so pure teen into a more sophisticated and sensual woman. A look into her bedroom is the come and that roused the interests of male and female fans alike. The American Family Association asked God-loving Americans to boycott stores selling Britney’s albums.

The spread definitely made a play for both sides of the stars persona, sexuality, and marketability. 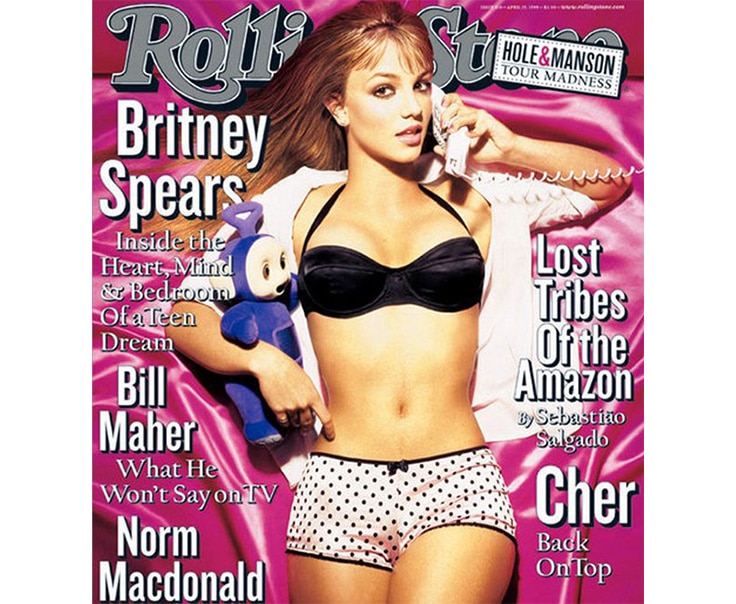 Topless, sweaty, and hot in a small pink bikini, Rihanna left no doubt in anyone’s mind what she is selling. The woman and her management made a ploy for sales by using sex. Is this new? Well not exactly new but it did make her new CD sales jump for a few days. That is what “controversy” does for you. 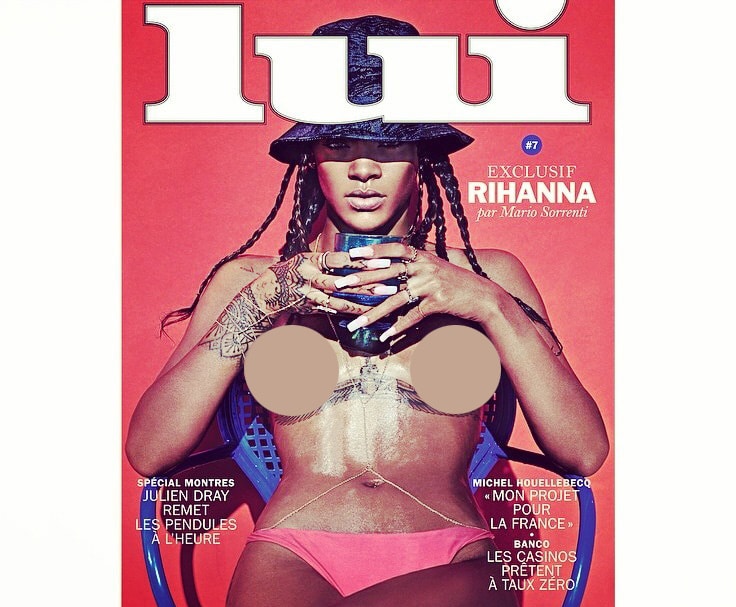 Now who cannot get the message behind a woman blowing up a condom? She ain’t planning on dropping that baby on anybody’s head.

An overtly sexual, hardly understated, and designed to whip up falling sales for the star this cover was even banned in a few stores. Getting banned is exactly what you want. Being banned piques the interest of lovers and haters alike. 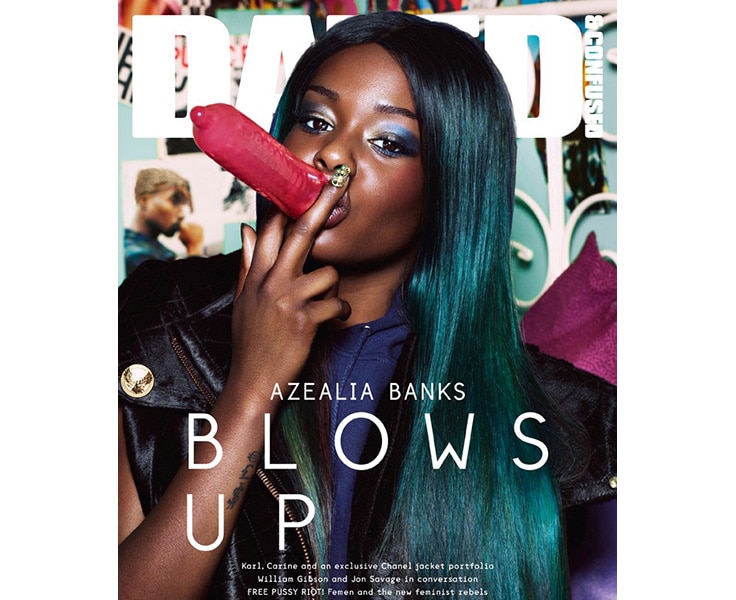 Now what is not to like about a nearly naked Christina Aguilera holding a blue guitar on red satin sheets. An adroitly placed leg, guitar, and hand covered all the “naughty bits”. Rolling Stones editors and photographers are masters in designing covers that titillate and sell. 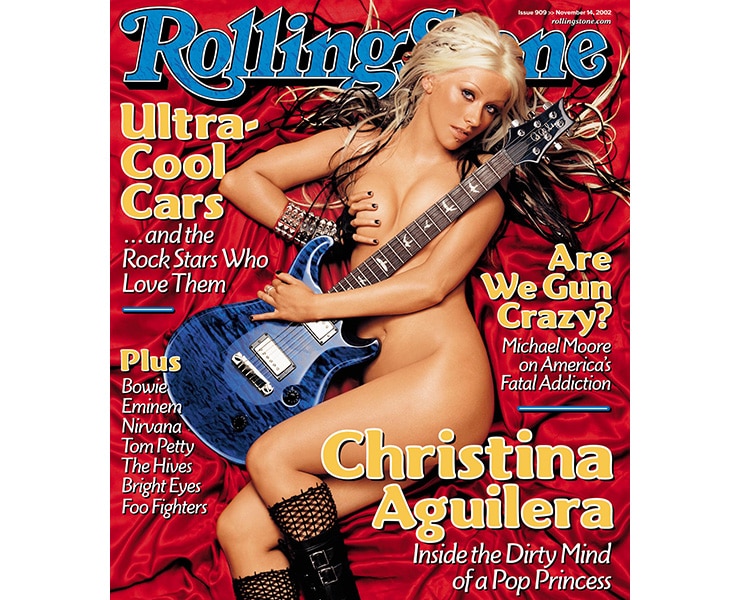 This cover made a big deal in its day. Yoko in black and John in nothing kissing her cheek (face). You do not see any X-rated parts. Made a huge stir in its time and was part of the promo for John’s auspicious solo career that included dropping Yoko’s awful screeching. 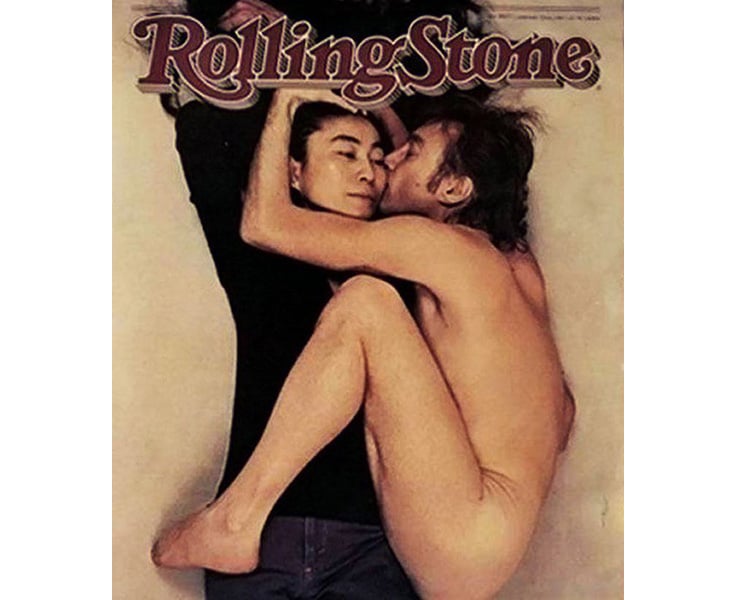 A pair of unknown hands cup and cover Janet Jackson’s breasts from behind as she wears a half unzipped pair of denims. If you do not get the message you are obviously dead. This was a part of the “wardrobe malfunction” promotion that made Jackson a household word at least for a few months. 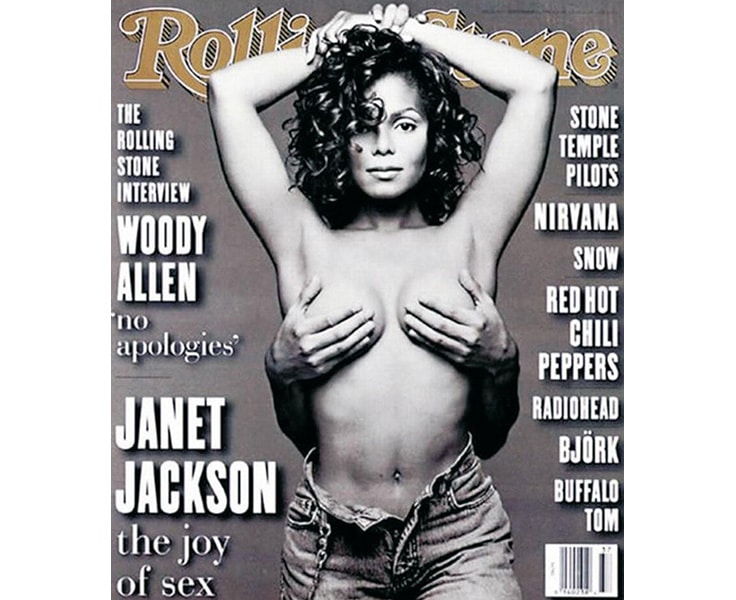 Kanye as Jesus with a crown of thorns. The cover was planned to come out the same day as his new album. Many born again Christian boycotted the Stone and that sold more copies than anything else. Nobody thinks of Kanye as Christ except maybe Kanye. This is really self delusion to the max. 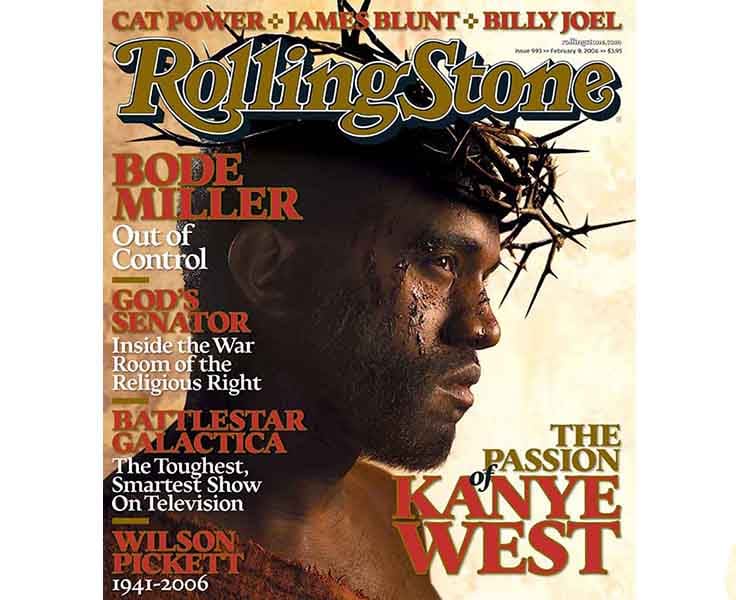 All bare Dixie Chicks with all the bits covered up. All the slogans are commemorating the Chicks ban that many felt was unpatriotic. A definite prime example of how easy a few words in a song no one remembers now can make a huge response. The cover is just using the hatred to sell more CDs. 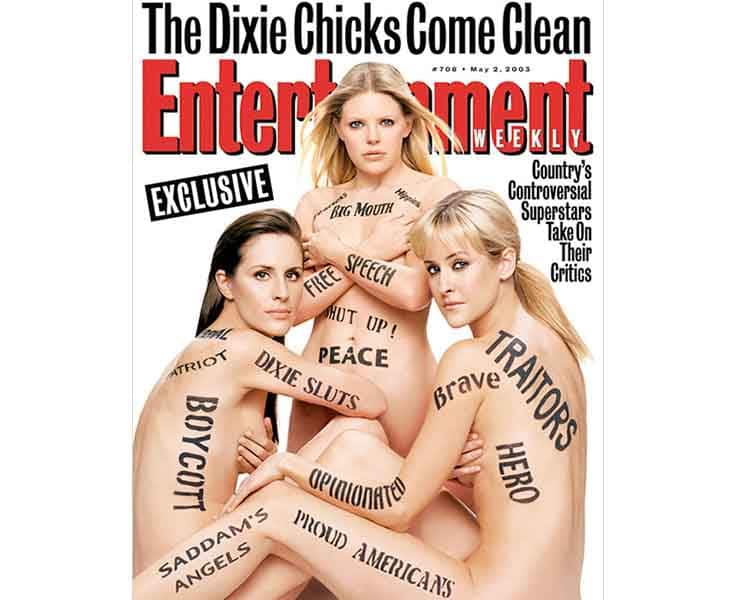 Hugely pregnant and naked, Demi Moore looks ready to burst. The cover is obviously altered because her face shows no sign of the effects of pregnancy. People raised a stink about a naked pregnant woman. Just an attempt to stay in the spotlight while you are too pregnant to get any roles. 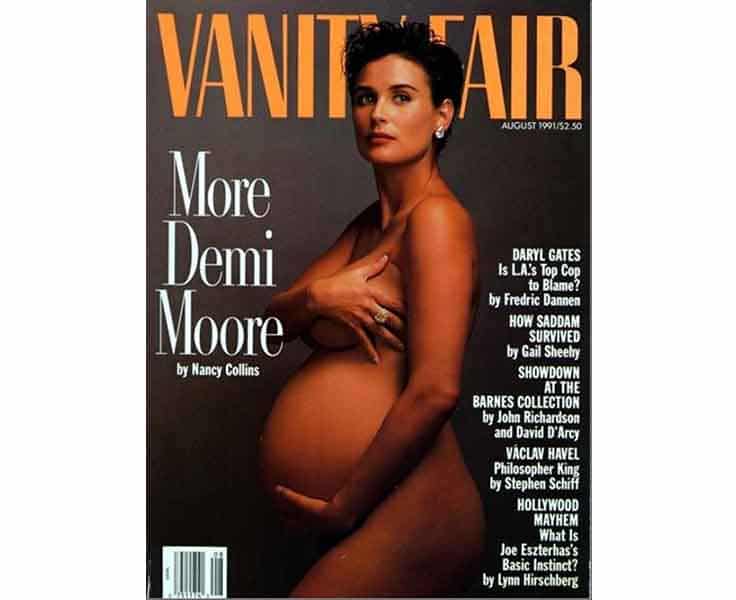 All dressed up to get hitched after they had a baby. Gigantic ring in tow, both Kanye and Kim never looked or acted so demure. What was the stink about? It is not like a black man and a white woman never got married before. Really a baffling reaction to a tame cover. 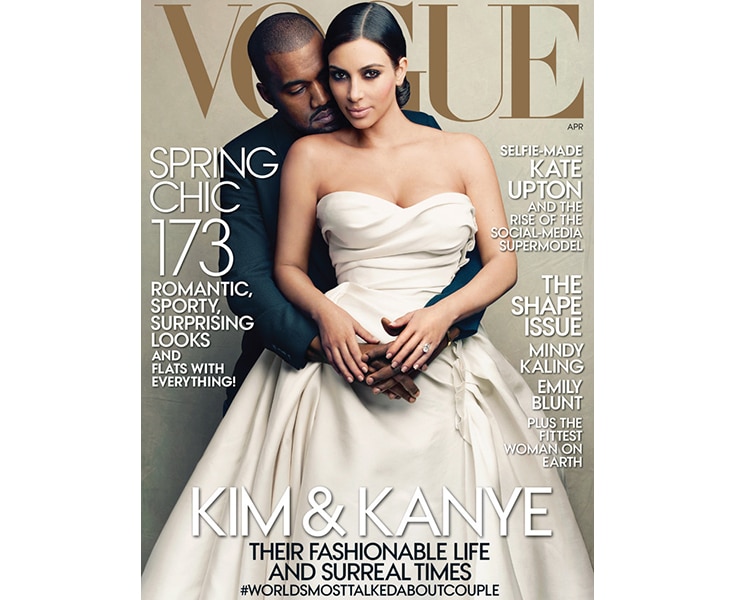 The big stink is Lebron having his game face on and folk got offended. Oddly nobody ever got offended from seeing the same face on the man playing b-ball especially if they were betting on his team. Just another excuse for pulling out the race card. 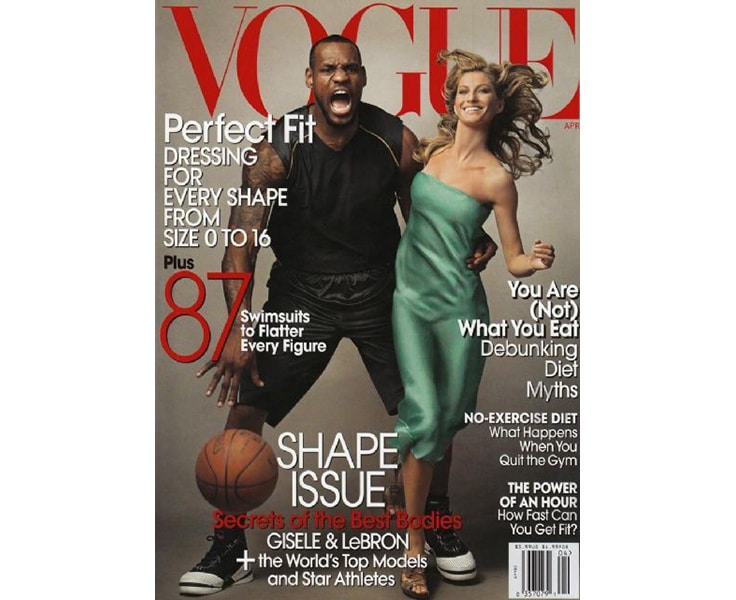 Ali as St. Sebastian in an all too evident plea against the war in Vietnam and promotion of Ali’s refusal to be drafted. Fight fans, antiwar groups, pro-war groups, and Catholics all raised cane about the cover that faded into memory in a week. 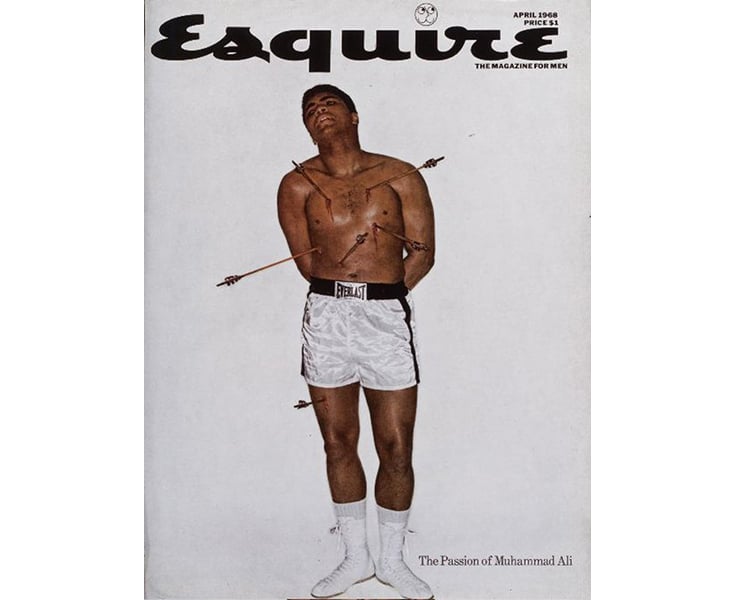 Ellen comes out on the cover of time. As if everyone did not know. Clearly a promo for her agenda – whatever it is. While gay haters spewed vitriol all the cover did was get Ellen more viewers anticipating intimate details. 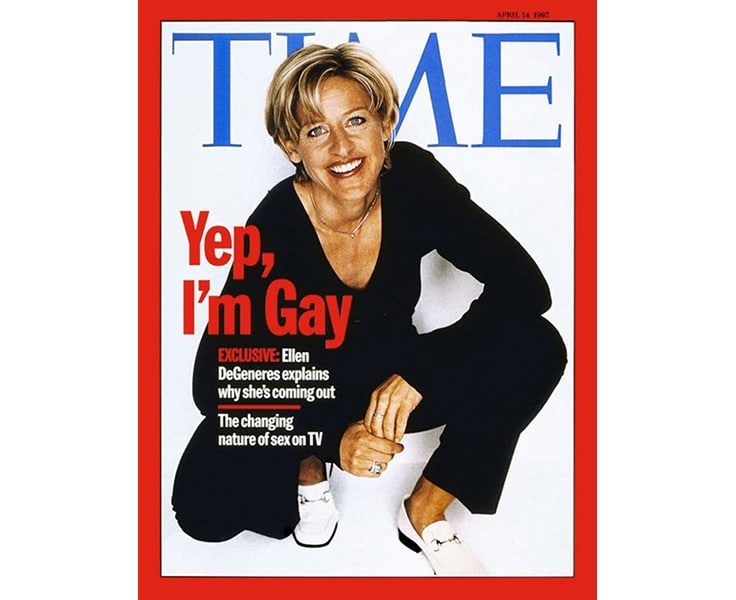 A cartoon cover depicting then candidate and his wife as Muslim terrorists. Obviously a parody of the hype from FOX “News” and other conservatives, the cover was condemned by both parties alike. Looking back one can see the irony of the irate response as Obama has attacked more Muslim’s than Bush. 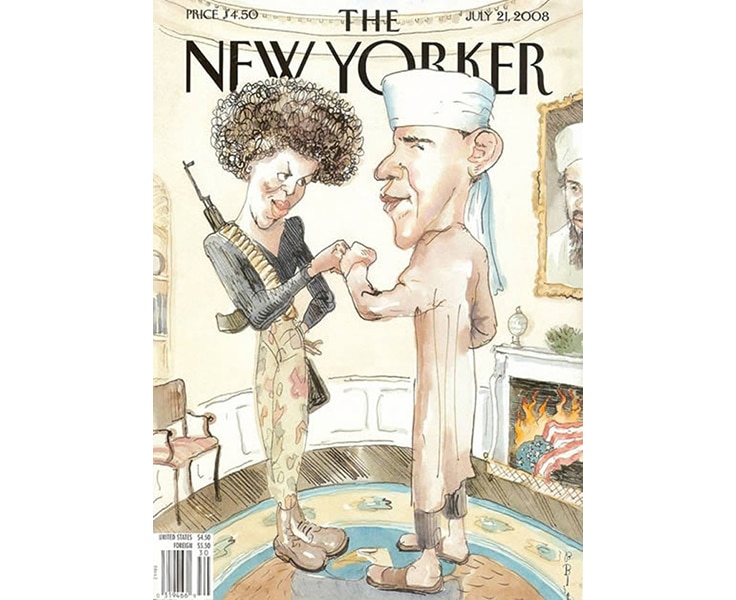 Courtesy of The New Yorker