Wealth of the Rockefellers

The ambitions of a 16-year-old bookkeeper in Cleveland, Ohio, were to earn $100,000 and to live 100 years. The bookkeeper’s name was John D. Rockefeller. The time was the middle of the nineteenth century. That is how the Rockefeller legacy began.

Rockefeller’s business training included a ten-week class in accounting. His con-artist father said once, “I cheat my boys every chance I get. I want to make ‘em sharp.” (from the biography John D. Rockefeller: Anointed With Oil).

Standard Oil, Rockefeller’s flagship company, was broken up in 1911 by the Sherman Anti-Trust Act. But the man’s greatest legacy, his family, lives on, spanning more than 200 people. According to Forbes’ list of America’s wealthiest families, they possess a collective net worth of around $10 billion.

When Standard Oil was broken up by the federal government, its spin-offs became today’s powerful oil companies like Exxon-Mobil, British Petroleum, Chevron and ConocoPhillips.

John D. Rockefeller became the world’s first billionaire in 1916. One billion in 1916 is approximately equal to $30 billion today, after adjusting for inflation. However, this underestimates the oil scion’s wealth.

By the time he died in 1937, Rockefeller’s assets equaled 1.5 percent of America’s total economic output. That would be around $340 billion, four times that of today’s wealthiest person in the world. 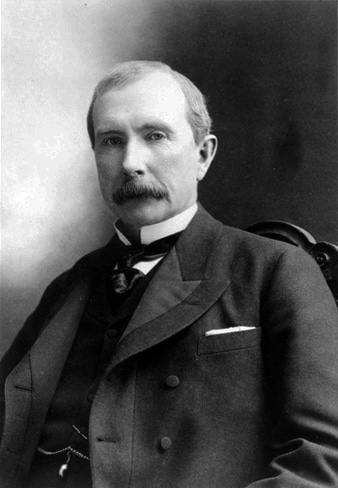 Despite the family’s wealth, the Rockefellers no longer stand atop America’s financial hierarchy. They rank 24th on Forbes list, definitely a far cry from the heyday of John D. Rockefeller.

The single wealthiest family member is David Rockefeller. He was the CEO of Chase National Bank. He is politically well-connected and commands a fortune that Forbes values at $3 billion. He was offered roles of the Chairman of the Federal Reserve and Secretary of the Treasury, but he declined them.

Many members of the Rockefeller family have made substantial inroads in politics. They collectively hold enough posts to rival another influential family in the US, the Kennedys. Late Nelson Rockefeller served as the vice president under Gerald Ford.

Winthrop Aldrich Rockefeller became the first Republican Governor of Arkansas since reconstruction. His son Winthrop Paul Rockefeller served as the state’s Lieutenant Governor until his death in 2006. His cousin John Davidson Rockefeller IV serves as a senator from West Virginia.

John D. Rockefeller is no more with us, but his legacy lives on.