When it comes to good whiskey, money is no object. Still, even if you’re the biggest whiskey fan in the world, you may think twice before purchasing the whiskey below. Why? First of all, few people can actually afford it and second, you might find yourself broke. Meet the most expensive whiskey in the world, the Isabella’s Islay. Although they say a good whiskey never comes cheap, it doesn’t mean it has to leave you homeless, right? This luxurious whiskey is all about a very glam bottle that costs more than a diamond necklace and a platinum and gold bracelet put together. 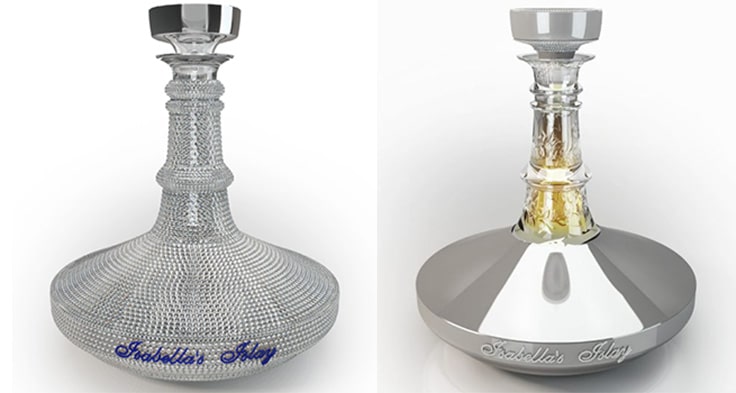 The Isabella’s Islay whiskey bottle is made of crystal and white gold covered with around 8500 diamonds and about 300 rubies, encrusted with great care by London’s most respected jewelers. The bottle itself has a very sensual and extravagant shape making anybody want to take a sip of the most expensive whiskey ever. Also, the amazing cost includes the option to handcraft the bottle according to your preference. Could this whiskey be a very expensive jewelry creation rather than a drink itself? Probably. Either the case, nobody throws these bottles to the dumpster, right? The Luxury Beverage Company that produces the most expensive whiskey in the world is also known to produce the most expensive non-alcoholic drink, named Ruwa.

What is the price of the world’s most expensive whiskey? You can have this in your bar for no less than $5.5 million. Well, most of us may never see this amount of money in their entire life, but what the heck. Why not throw them on a bottle of whiskey? You’ll probably realize after the hangover goes away, the monumental spent you’ve made and regret it. Or, in order to avoid this situation, let others spend that much money on alcohol. As for the diamonds? They would probably look better around a beautiful woman’s neck!