Top 10 Most Expensive Wars in History 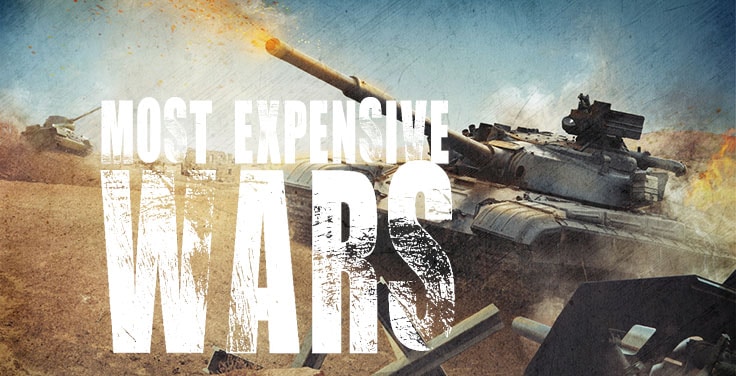 Wars are destructive and expensive affairs. Properties worth trillions of dollars have been lost in various wars worldwide.

Here is a brief overview of the top 10 most expensive wars in history, amount adjusted to reflect their 2013 equivalent.

The Mexican War also known as the  Mexican-American War began when the US annexed Texas in 1845. The war forced Mexico to give Alta California and New Mexico to the US.

The American Revolution was a conflict between the British Crown and the 13 colonies in America. The colonies in America demanded equal rights. The disagreement on how they should be treated let to a cry of No Taxation Without Representation. The war ended with the Treaty of Paris in 1783.

During those days Cuba (which is just off Florida) was under Spanish regime. The US asked Spain to hand over Cuba. When Spain refused to do so, the Spanish-American War started. The war resulted in defeat and collapse of the Spanish Empire in the region.

Under the leadership of Saddam Hussein, Iraq invaded Kuwait in 1990. It claimed that Kuwait would have been a part of Iraq if the British had not intervened. He also threatened Saudi Arabia. This invasion threatened the oil supply to the western nations. The US got involved by launching Operation Desert Shield in order to protect Saudi Arabia. This became Desert Storm, a war to free Kuwait.

The First World War started in 1914. The Americans joined the war in 1917. The war was between two camps: Allied Powers of Britain, France and others, and the Central Powers of Germany, Bulgaria and others. Americans supported the Allies.

Korea was one of the battlegrounds during the cold war. The nation had been divided into a communist north and capitalist south. China and the USSR supported the north and the US supported the south. General Douglas MacArthur considered using the atomic bomb during this war.

The Vietnam War is known as Resistance War Against America in Vietnam. This was a cold war era proxy war that occurred in Vietnam, Laos and Cambodia. Americans lost the war, but subtly covered it up by pulling out their forces before the defeat became obvious.

The terrorist attacks on strategic targets in the US on September 11 2001 shocked the world. The US responded by going after Al Qaeda, the group responsible for the attacks. The members of the group were hiding in Afghanistan under Taliban’s protection. Americans hunted them down. Americans also waged war against Iraq for supposedly possessing a nuclear weapon. However, no evidence was ever found that Iraq had the capacity to build the nuclear bomb. But the damage was done.

The Second World War is the most expensive war in the history of mankind. Nuclear weapon was used for the first time in this war. It began in 1939 when Nazi Germany attacked Poland. It spread across Europe when Britain and France declared war on Germany and Italy. US got involved when Japan attacked the Pearl Harbor.

Wars can never be won, and thus, must never be fought. The amount spent on various wars would be enough to solve the world’s crisis including hunger.