Largest Oceans in the World 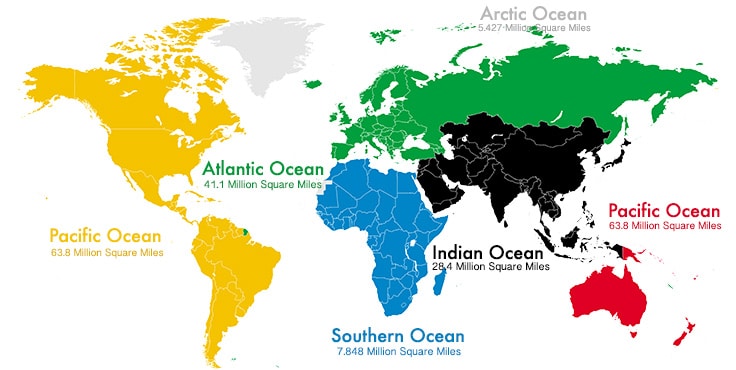 An ocean is a very large expanse of water. It is a vast body of salt water that covers almost three fourths of our planet’s surface.

Here is a brief overview of the top five large oceans of our planet.

The Pacific Ocean covers around 63.8 million square miles and contains more than half of the free water on our planet. It is the biggest ocean on earth. It is so huge that all the continents could fit into it.

With around 41.1 square miles, the Atlantic Ocean is the second largest ocean in the world. It covers approximately 20 percent of our planet’s surface. It contributes significantly to the development of the surrounding nations.

The Atlantic Ocean occupies an S shaped basin, extending longitudinally between Eurasia and Africa to the east and the Americas to the west. It is connected to the Pacific, Arctic, Indian and the Southern Oceans.

The Indian Ocean is the third largest ocean in the world. Its area is approximately 28.4 square miles. The ocean’s currents are mainly controlled by the monsoon. It is the youngest of the major oceans.

Many large rivers like the Ganga, Brahmaputra, Zambezi, Indus, Narmada, Shatt al-Arab and Jubba flow into the Indian Ocean. It provides major sea routes that connect the Middle East, Africa and East Asia with Europe and the Americas.

Also known as the Antarctic Ocean, the Southern Ocean encircles Antarctica. It is the fourth largest of the five oceans of our planet. The National Geographic Society does not depict the Southern Ocean term. Instead, they show the Pacific, Atlantic and Indian Oceans extending to Antarctica on both their print and online maps.

The Arctic Ocean is the smallest among the earth’s oceans. It is located in the northern hemisphere, mostly in the Arctic North Polar Region.

It is the responsibility of all nations of the world to keep these great bodies of water clean.