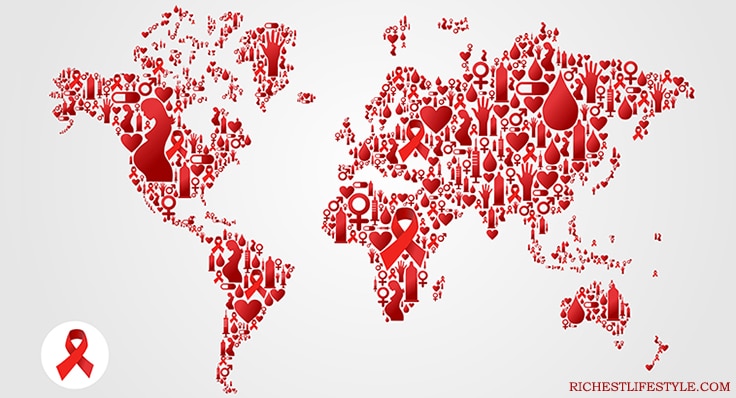 AIDS (Acquired Immunodeficiency Syndrome) is a disease characterized by severe loss of the body’s cellular immunity, greatly lowering the resistance to infection and malignancy.

The prevalence of HIV virus, which causes AIDS, varies from country to country. Here is a brief overview of the 10 countries with highest HIV/AIDS as of January 5, 2011, as per World Health Organization (WHO).

Around 100,000 people die of AIDS every year in Democratic Republic of Congo. It is one of the first African nations to recognize the virus. Here the main mode of transmission (87 percent of cases) is unprotected sex.

HIV may have entered the US through a single infected immigrant in the late 1960s. There are a higher percentage of AIDS diagnoses in the eastern and the southern states. Majority of the AIDS diagnoses can be found in the coastal regions.

In Uganda, AIDS has been approached as more than a health issue. In spite of appropriate steps by the government to deal with this disease, HIV infection rate in Uganda is on the rise.

Around 15 percent of the population in Zimbabwe is affected by this disease. The virus is transmitted primarily through unprotected sex and from mothers to their children. Young adults and woman are hardest hit.

Tanzania faces a matured generalized HIV epidemic. Tanzanian women are particularly affected by this disease; around 60 percent of the affected are women. Around 86,000 people die of AIDS every year in this country.

Mozambique is facing a severe, generalized HIV/AIDS epidemic. Around 74,000 people lose their life every year due to AIDS. The primary mode of transmission is through unprotected sex.

Even though Kenya has severe, generalized HIV epidemic, the nation has experienced a notable decline in HIV prevalence in recent years. Around 80,000 people die of AIDS every year in Kenya.

The prevalence of AIDS in India has reduced (0.41 in 2002, 0.27 in 2013) over the past decade. Around 170,000 people die of AIDS in India every year. The spread of the disease is primarily restricted to the northeastern and southern regions.

Around 220,000 people die due to AIDS every year in Nigeria. The HIV prevalence rate among adults (aged between 15 years and 49 years) was 3.1 percent. The epidemic is complex and varies widely by region.

South Africa has more people with HIV than any other nation in the world. Approximately 12 percent of the population of South Africa is affected by HIV/AIDS, and around 310,000 people die due to this disease every year in this nation.

These nations are taking steps to deal with this harmful virus, but much more needs to be done in this direction.