Celebrities Who Cheated On Their Spouses 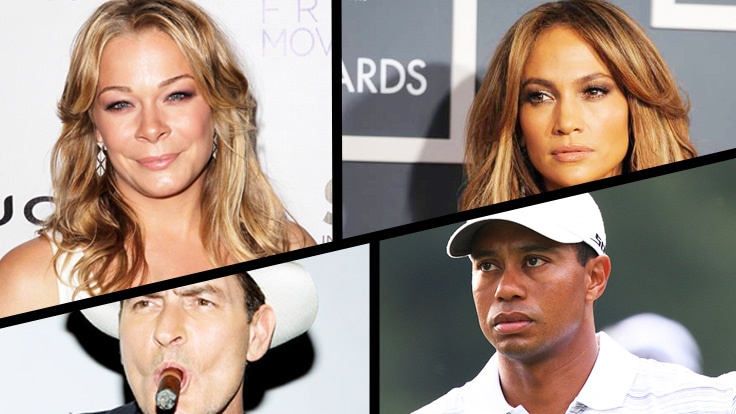 In Hollywood it is not unusual for celebrity couples to cheat on each other. Many cheat on their partner while others are merely accused of it, but either way, Hollywood celebrities have a reputation for cheating on their spouses. Here are several celebrities that are guilty of this deception (or at least rumored to be guilty.)

One of the most notorious recent cases of a celebrity cheating on their spouse is Tiger Woods. He was very publicly caught cheating on his wife with several different women. The chain of events this triggered caused Woods to lose many of his endorsement deals. In order to placate his wife through the divorce Woods gave her very expensive jewelry to apologize for his infidelities. He claims that his cheating stemmed from his addiction to sex.

Another case of celebrity cheating that was splashed all over the headlines was when Charlie Sheen cheated on then wife Denise Richards. After having been caught carrying on an affair with his assistant, Denise Richards left Charlie Sheen and filed for divorce. He denies that he cheated but she claims to have walked in on him sleeping with the assistant in question.

Not to be outdone, Jon Gosselin, of the reality show Jon and Kate Plus Eight, blamed his cheating on wife Kate Gosselin on not being able to handle the sudden fame of becoming a reality show TV star. It was reported that Jon had numerous affairs with multiple women before divorcing Kate. When the couple divorced their reality show was cancelled.

Jennifer Lopez and Marc Anthony broke up amid allegations that she was having an affair with one of her backup dancers. Now that they are divorced Lopez is dating a man named Casper but was reportedly still sleeping with Marc Anthony since their divorce was finalized.

Meg Ryan had an affair with Russell Crowe during her marriage to Dennis Quaid. Years after the divorce Ryan stated that Quaid had also been cheating on her throughout the marriage.

Anne Heche began having an affair with actor James Tupper while she was married to Coleman Laffoon. After it was exposed in the media that she was having an affair she and Laffoon divorced and she went on to have a baby with Tupper in 2009.

LeAnn Rimes and Eddie Cibrian were both married to other people when they began dating. At the time Rimes was married to Dean Shermet, whom she later left to be with Cibrian. Following in her footsteps, Cibrian divorced his wife of eight years.

These are just a few of the Hollywood couples who have cheated on each other during their marriage. This phenomenon is one that has been growing among celebrities.