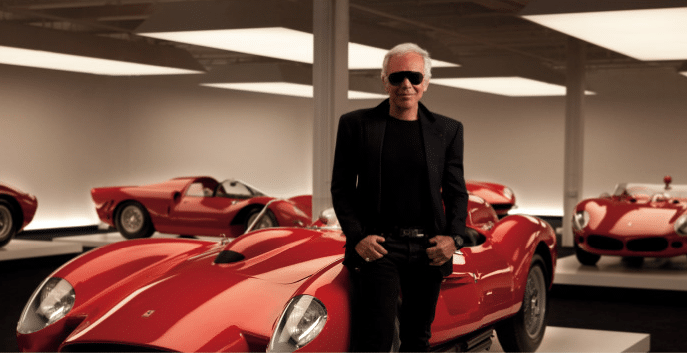 Ralph Lauren is known as a fashion tycoon who is a proud maker of the stunning polo shirts. Ralph Lauren owns Ferraris, Alfa Romeo roadsters, Bugattis, Mercedes, Bentleys, Jaguars and McLaren F1 sport cars, more than 60 cars in total. And 98% of the cars in his collection are red in color. In addition, Ralph Lauren has had a special garage made at his New York estate where the cars sit on an all-white platform that is raised on a black carpet. He is on 9 in the list of Top 10 biggest car collectors in the world.
Also See: Most expensive Brands in the World

Nick Mason is the long-time drummer for legendary, and super influential, rock band Pink Floyd. He is busy tending to the more than 40 rare and high-end vehicles he owns. Nick has a particular fleet of Italian sports cars. Some of the most impressive cars in Nick Mason’s collection include a Bugatti T35, an Aston Martin LM18, a Ferrari 213 T3, McLaren F1, Porsche 962, and the infamous Ferrari 250 GTO. The whole collection is valued at more than $20 million. He is on 10 in the list of Top 10 biggest car collectors in the world